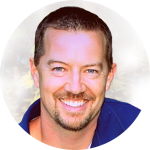 What is an NDA?

Table 1: Pros and Cons of an NDA for small businesses

In addition to the disclosing party and receiving party, there may be others parties to an NDA. For example, does the receiving party have employees, partners or investors that plan on reviewing the confidential information provided by the disclosing party? Will there be a third-party developer who will need access to the confidential information?

An NDA should clearly define the Disclosing Party, the Receiving Party, any third parties and the obligations of each under the agreement.

Do you need an NDA?

NDAs are common whenever confidential information is disclosed to prospective business partners, investors, creditors, employees, private contractors, consultants—or other stakeholders that require access to a company’s sensitive data or intellectual property. At some point most small businesses will share sensitive information that will require an NDA in order to move forward safely.

The following are specific situations where a small business may benefit from an NDA.

Requirements for an NDA

An NDA can be customized to meet the needs of the parties, but there are five essential elements every NDA should include.

Additional provisions that may be included in an NDA:

If you need an NDA to protect sensitive business information, there are three types of non-disclosure agreements to consider: unilateral, bilateral, and multilateral. Each type is discussed in detail below.

Table 2: NDA types: When to use them.

The following are the most common unilateral NDAs used by small businesses.

An Employee NDA is one of the most common and useful non-disclosure agreements a small business can and should use. The purpose of the employee non-disclosure agreement is to ensure current and former employees do not disclose or share confidential business information or sensitive data with any third party or competitor. Examples of protected information under an employee NDA include:

An employee NDA can’t protect information that is already in the public domain, has been ordered revealed by a court, can be discovered following a product release to the public, or was obtained by the employee prior to signing the agreement.

A contract NDA is another common non-disclosure agreement a small business can use to maintain confidential sensitive company information. As with an employee NDA, the contractor NDA identifies what information is considered confidential and restricts contractors from sharing sensitive business information that could reduce the competitiveness of a business.

A contractor NDA may also include conflict of interest and non-competition causes that protect a business by further limiting how a contractor can use information and knowledge they’ve gained while working with a business. It’s important to have a well drafted NDA when working with independent contractors. However, it’s also important to remember that a contractor may decide not to work with your business if they feel an NDA is too restrictive.

The contractor NDA is typically unilateral. On occassion, when a contractor also needs to protect their own information, a mutual NDA may be appropriate.

The confidentiality of intellectual property and unexecuted ideas and business plans is critical to the economic success of an invention. An inventor can use a unilateral NDA, such as a patent or invention non-disclosure agreement, to protect proprietary information and limit evaluators from using or disclosing the inventor’s work product(s), including development processes, designs, drawing, equations, formulas, patent appliciations, product data, intellect property and other confidential information.

A small business in the processes of selling or licensing product technology or services can limit the buyer from sharing confidential information obtained during the sale via a unilateral NDA. A seller-buyer NDA restricts the buyer from disclosing confidential information relating to business operations, manufacturing/production processes, technology and intellectual property.

The unilateral seller-buyer NDA is also recommended in the event of a Merger and Acquistion or sale of a business. When selling a business, an NDA is not required but highly recommended. Most business brokers require prospective buyers to sign an NDA before the release of any important proprietary or confidential information. When drafted accordingly, an NDA can also prevent prospective buyers from hiring away the seller’s employees prior to the sale of the business or in the event the sale falls through.

An NDA is also useful for qualifying buyers. If a prospective buyer refuses to sign an NDA, they’re not likely a serious candidate for acquiring the business.

Finally, a unilateral NDA can keep the sale of your business “hush hush” if you don’t want the word of your impending business sale leaked to the public. 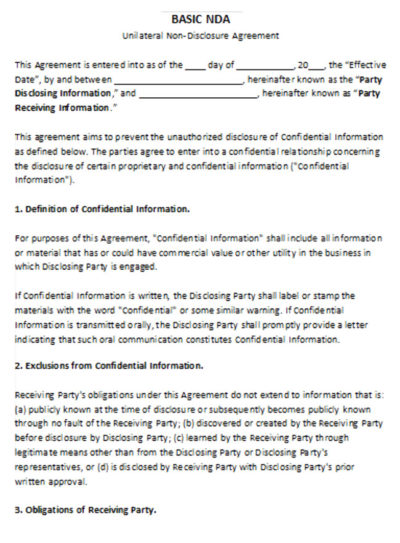 Even though the bilateral NDA is intended to protect the flow of confidential information between two parties, sometimes a bilateral NDA is desired when only one party is disclosing confidential information. This strategy is designed to incentivize the disclosing party to draft an NDA with provisions that are fair and balanced knowing their is a possibility that the receiving party could become a disclosing party at a later date. This scenario is not all that uncommon. 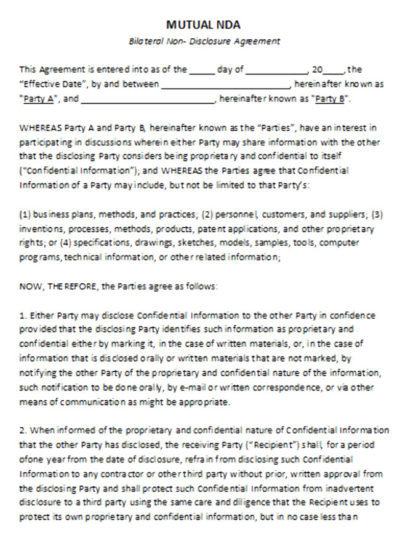 A multilateral NDA, or multiparty NDA, involves three or more parties where at least one of the parties discloses confidential information to the other parties. The disclosed information will then be protected from further disclosure by each party.

In some situations, the advantage of signing a single multilateral NDA may be offset by the time and cost required to negotiate the complexities a multilateral agreement requiring unanimous consensus between all parties. A multilateral NDA is common for larger, complex business deals that include multiple parties. 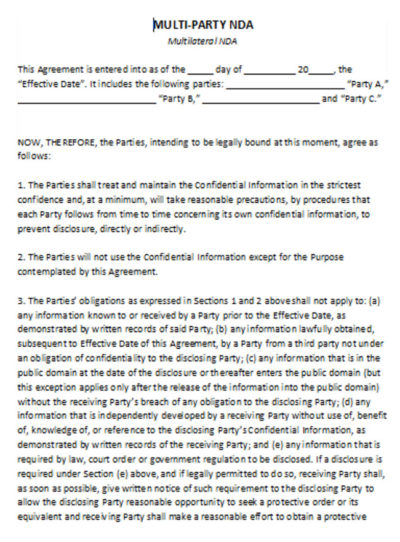 Remedies for Breach of NDA

An NDA should include mutually agreeable remedies in the case of breach by the receiving pary. Remedies should be explicitely outlined. Even when remedies for breach of contract are outlined in the NDA, the disclosing party should preserve their right to seek equitable remedies. Remedies should not be biased. The idea here is avoid a breach in the first place and protect the disclosing party for losses in case of breach.

Remedies available to the disclosing party:

Author: Becton Loveless
Becton Loveless is an entrepreneur, specializing in search engine optimization (SEO) and strategic internet marketing. He has built and sold several successful businesses supported entirely by SEO including an online nutraceuticals company,.... read more
You may also like

3 Contract Agreements Every Small Business Should Have

Disclaimer. We strive to provide accurate, up-to-date content. However, the content on this website is intended for educational purposes only. We are not acting as licensed professionals. You should consult with your own lawyer, accountant, or other licensed professional when making relevant business decisions.

Have a question? Ask the expert.